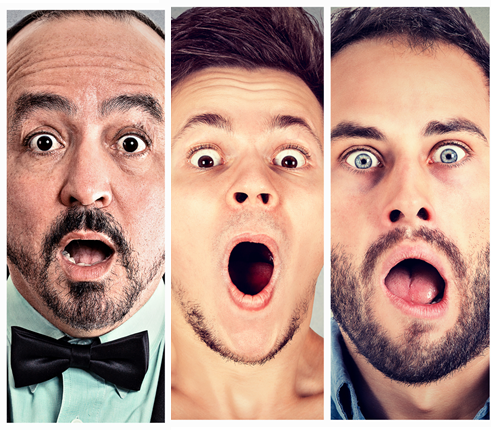 It motivates people to rocket to the moon and to explore the darkest underwater sea vents.

It’s one of our most basic biological drives,  innate even in toddlers, yet powerful throughout your lifetime.

It’s one of the strongest methods used by advertisers, and when executed skillfully, compels customers to pay attention.

It’s the power of curiosity.

What is this strange force, and why does it work?

It’s easy to underestimate curiosity. After all, it seems so innocuous. But curiosity is a mighty force. And the secret to tapping that force lies in knowing how it drives motivation.

Curiosity activates neural reward circuits, and it can enhance memory. In other words, if you harness curiosity, you can cue a prospective customer to pay attention to your marketing — and to remember it. Now that’s powerful.

According to researchers at Carnegie Mellon, the way to maximize curiosity is by increasing the gap between what they know and what they want to know. Don’t explain everything up front. Instead, leave specific details out, and slowly fill in the blanks.

Imagine curiosity as a hunger that desires to be satiated. You want to give away just enough to make your prospect interested, and then to provide additional bits of info to maintain the curiosity.

Social media posts are a treasure-trove of curiosity-inducing headlines. Upworthy is particularly infamous for this, churning out posts with titles like this one several times a day: 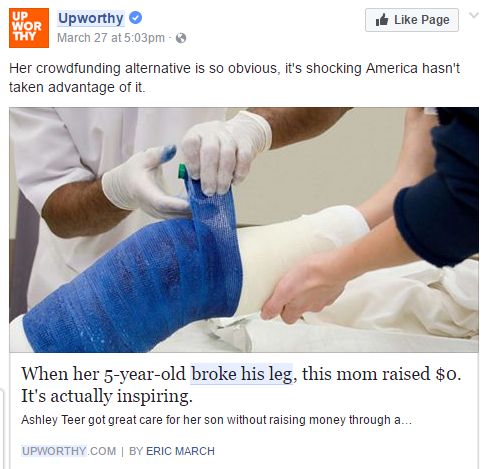 Surprisingly, the article has nothing to do with crowdfunding. Instead, it’s a critique of the healthcare system. If the post had been written by someone unfamiliar with the importance of piquing readers’ curiosity, it would have read something like this:

Why the US Needs Affordable Healthcare Coverage

Would you read an article with that title?

Curiosity in Entertainment, Products, and Services

Curiosity goes far beyond social media. In fact, you can use the power of curiosity to prompt a customer to notice your ad, pull into your store’s parking lot, or pick your product off the shelf.

One good illustration of this is the teaser trailer.

Unlike theatrical trailers, which present the premise and basic content of the movie, teaser trailers hold back. Their main objective is to build hype (read: curiosity) around the upcoming movie.  Take a look at this Frozen trailer:

What’s intriguing about this trailer is that it includes none of the scenes from the actual movie, and no words at all — but it creates curiosity around the upcoming release.

Curiosity can also be harnessed to move product. Here’s a superb illustration in the form of a print ad: 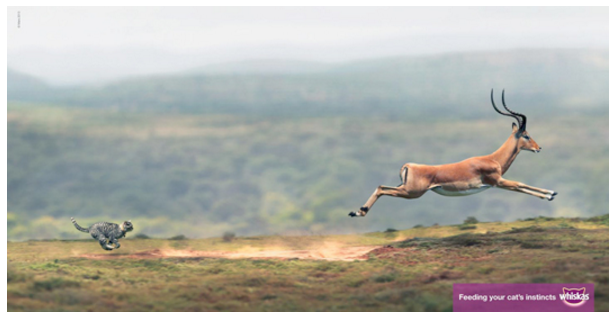 At first glance, this seems to be a typical wildlife photo. But the “wildcat” forces you to do a double take. Hey, isn’t that cat a bit small to be chasing such large game? Once the ad has pulled you in, you’ll likely notice the copy at the bottom-right corner of the ad.

What about service providers? Can curiosity be put to work in marketing service businesses?

Think of mortgage loan origination, a complicated business by anyone’s definition. Consider the convoluted mortgage advertising you’ve probably seen, packed with rates and APRs and lengthy disclaimers. Mortgage ads are often both boring and confusing, but what they do? After all, they’re restricted by rigid regulations, and their advertising must meet strict compliance guidelines.

Now take a peek at this video from Royal Bank of Canada.

Curiosity is the star here, taking a complex service and pulling you in. For any service, there is the direct, obvious way to present the benefits — and then there are creative, innovative ways that utilize curiosity.

That’s why it’s worth considering curiosity as a valuable tool. Can you incorporate curiosity into your own marketing? What can you hold back to grab the attention of your prospects?

Yes, it takes some effort to be spot the elements that will induce curiosity. But it’s worth it.

While curiosity is valuable, you want to be careful not to go overboard. There’s nothing more disappointing than curiosity that doesn’t deliver.

For example, if you create a blog post with an attention-grabbing headline, your article should acknowledge the reader’s curiosity and provide some real information about your topic or product.

If you don’t provide anything of value, then your marketing will leave your prospects feeling like they’ve been “had.” Contrast the two items below: 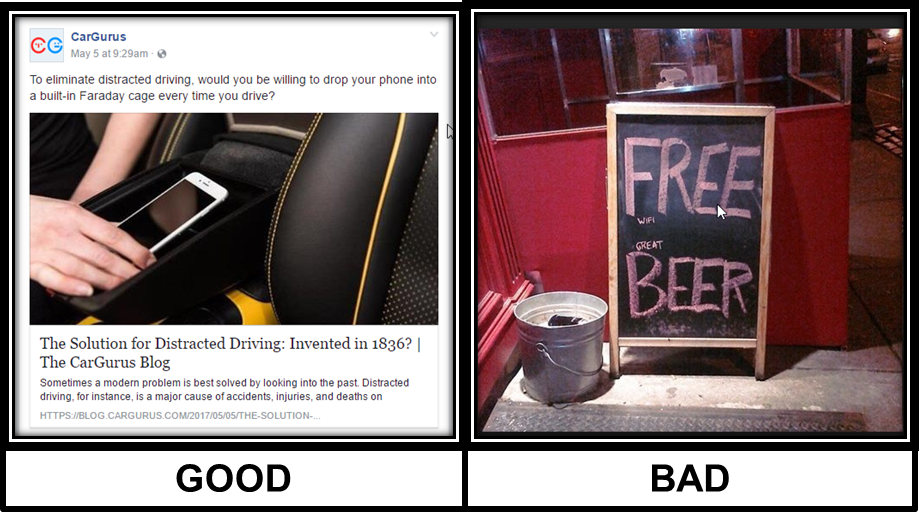 The Facebook post on the left is a good example of using curiosity to drive clicks. It contains an element of surprise; you’d never think the solution for a modern-day problem could have been invented almost two centuries ago. And the content delivers! The Faraday box actually was invented in 1836, and it could solve distracted driving — if only we would agree to use it.

The sign on the right, however, is a bad case of using curiosity to trick your customers. It definitely draws eyeballs, but then what? No one enjoys feeling that they’ve been bamboozled. “Bait and switch” is a good way to alienate your consumer base, and to come across as devious and untrustworthy.

Bear in mind that your goal in using curiosity isn’t to mislead prospects. Instead, the intrigue should always be followed with rewarding content.

In today’s crazy-busy, tech-driven world, it’s hard to grab anyone’s attention. That’s certainly true when it comes to communicating with your customers, even when your product or service has quantifiable benefits. So tap into your customers’ curiosity by using teaser headlines and intriguing visuals, and watch their mouths drop open.