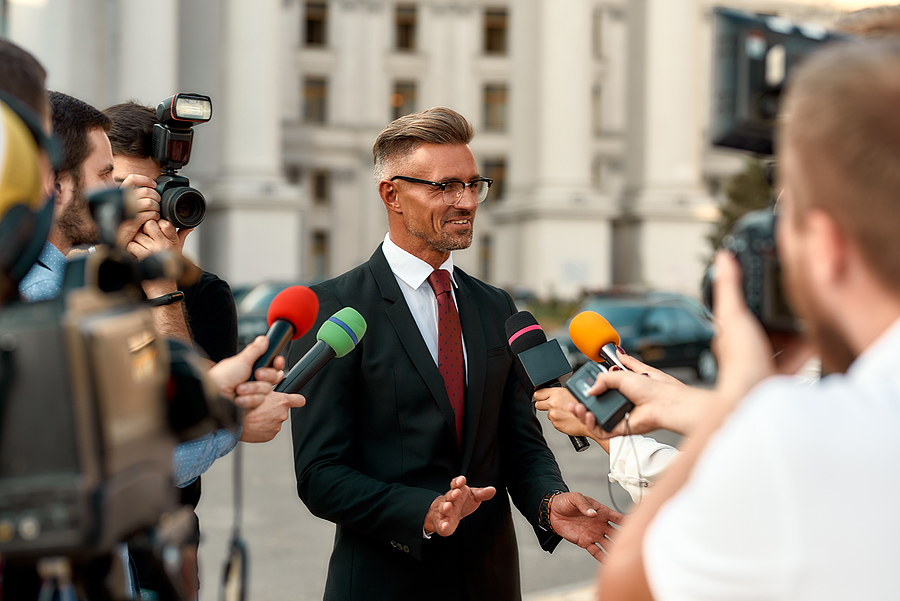 You’ve finally mastered the basic tricks of the media coaching world: You know what to say, and you know how to say it. So you’re all set. Right?

Not quite. There’s a lot more to media coaching than verbal and nonverbal communication. Media coaches spend time helping you set the stage for success. They strategize with you about how to dress, how to modulate your voice, how to prepare beforehand, and how to stay in control while battling stressful questions or faulty microphones.

One of the primary steps many media coaches take when working with a client involves the client’s wardrobe. Before a speaking engagement or media appearance, especially one being broadcast to thousands of people, be cognizant about whether the clothes you’ve chosen reflect your brand’s values and the message that you want to get across.

If you are trying to represent a serious business, go with the classics—like a dark jacket over a white shirt—rather than clothes with a lot of designs or patterns. Don’t be like this guy, who decided to offer his expertise on the stock market in a jacket that made him look like a cow with a bowtie. (Granted, he grew up on a farm and wears the jacket proudly—it was his father’s—but it still doesn’t give off the right impression on screen.)

But it gets more nuanced than that. If your business is cutting-edge, like a tech startup that’s just gotten off the ground, you might opt for bolder colors or patterns, along with some stylish accessories to show your confidence. And if you’re speaking for a non-profit that is helping combat poverty, you’ll want to avoid name brands or expensive jewelry.

Sticking to a regular tone of voice can help you sound authoritative and confident. Focus on the tone, timbre, and volume of your voice to make sure that it is being projected sufficiently and conveying the same message that your clothing is. Make sure you’re not trailing off or using excessive fillers (“um” or “so”). And make sure that your voice doesn’t rise in pitch when you are challenged. A higher pitch makes you seem irritated or defensive, rather than confident and calm.

For example, here are some fascinating insights into modulating your tone:

Before any presentation or interview, you’ll want to make sure you know what to expect. Every situation is different, and each will require different preparation to be successful at a practical level:

When it comes time, your biggest focus should be to stay in control of the conversation. Ignore the cameras, keep your breathing and speaking slow, and don’t let the interviewer steer the conversation. Instead, take the time that you need to craft the perfect response for each question. White house press secretaries do this in almost every press conference, and are often chosen specifically because they are not easily rattled. For example, take a look at how current Press Secretary Jen Psaki handles a difficult question from a Republican news station:

Compare that with Charlie Sheen’s response to a reporter whose questions he found annoying. Not very flattering — some media coaching could have been helpful.

What if you’re blindsided by a question that takes you by surprise? Take a sip of water or say “That’s a great question. I like to think about it like this…” to buy yourself a few seconds to think of a good response. If you need even longer than that, it’s better to look thoughtful and silent for a few moments on camera than to blurt out the first answer that comes to your mind.

Keep in mind that things will inevitably go wrong. Be flexible, no matter what. Take a note from Scott Totzke, CEO and co-founder of ISARA CORPORATION, who was speaking at the Hudson Institute and was told—right as he got up to speak—that they accidentally misplaced his slides.

Or even more famously, remember Bill Gates’s response back in 1998 when he turned up the “Blue Screen of Death” during a live new feature launch. He never lost the smile on his face, nor did anyone lose their jobs over this huge gaffe; instead, he simply rebooted the computer while laughing and continued on with his presentation.

And no matter what, be polite. Don’t interrupt. If it’s a panel discussion, respect all the other panelists, and thank everyone involved afterwards. Keep in mind that although you may feel like “they” are out to get you, they are generally just trying to do their jobs and keep their listeners’ interest.

Remember that your company’s reputation is on the line every time you meet with a group of clients, speak at a conference, or step in front of a camera. Especially in today’s “going viral” environment, one slip of the tongue can haunt both you and your company for years. So even if you’re not planning to invest in a media coach, keeping these tips in mind can help you up your media-skill game and communicate most effectively.

This is part 3 in a series that addresses how business owners can use media coaching strategies. This post discusses several “big picture” media techniques business owners should utilize. Part 1 addressed how to improve your verbal communication skills, and Part 2 described how to improve your nonverbal communication skills. See all the articles in the series here.