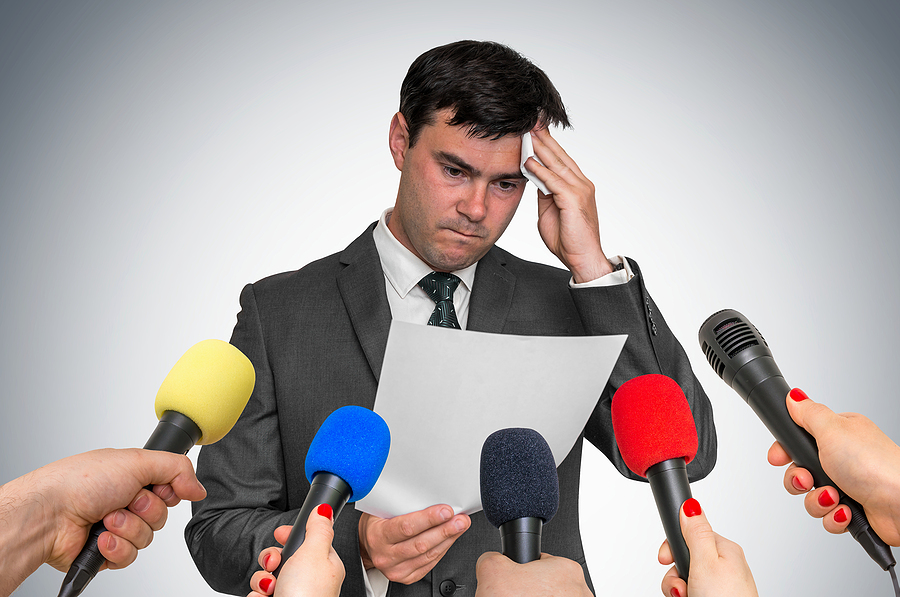 Jeffries, former CEO of Abercrombie & Fitch, famously let slip in an interview that he believed that his company targeted primarily thin, attractive consumers, stating that “a lot of people don’t belong [in our clothing], and they can’t belong.” He didn’t want his customers to include “uncool kids” or “fat women.”

About a year after this quote became public, he was forced to retire.

Most of us are sure we would never make such an imprudent comment. But when you’re in the spotlight, it’s easy to fumble your words and say something you’ll later regret.

You’ll see businesses crash and burn for similar reasons all the time. Why? Because most business owners go into presentations and interviews without any media training.

What is Media Training?

Media training (or media coaching) is the practice of preparing people for media appearances and interviews. Most top celebrities and politicians have undergone media training, and many high-level CEOs are beginning to do so as well.

For many small business owners, media coaching is not a topmost priority. At the same time, you can learn a lot from the tips and techniques that media coaches give their clients. Let me share some of these with you.

The first step of media training is to ensure that you have your messaging down pat. Whether you’re presenting on a panel discussion at a conference, answering reporters’ questions, or taking part in a media interview, taking advantage of some basic media coaching tips can give you confidence and the ability to respond in a way that best represents your company’s interests.

Tip #1: Do Your Research

Then try to imagine how they will be thinking. What opinions will your audience most likely have? Which questions might the interviewer ask? What angles could the reporter take?

Make sure that you know the most important facts about your company and the issues that will likely be addressed, including any key facts, numbers, or statistics. Don’t end up like Diane Abbot in this horrendous interview with Nick Ferrari in 2017.

You know so much about your business that you could go on for hours. The problem is…no one else is interested in listening for hours.

Less is more. Sit down and map out a list of several key ideas that you’d like to get across, especially concerning issues that you know will come up. Then develop clear and concise sound bites—about 15 seconds long—that will resonate with your audience.

You can use key phrases like these to introduce your prepared sound bites into the conversation:

You can also use key phrases to deflect questions that you’re not prepared to answer:

Often, if you listen carefully to politicians answer questions, you can hear their preferred key phrases. For example, Press Secretary Jen Psaki tends to tell people she will “circle back” and answer any difficult questions that she does not currently have an answer for. Watch her do it here.

In addition to your sound bites, make a list of what you don’t want to say. It can be easy to make a slip of the tongue when you’re feeling anxious, so brainstorm different ways that you can divert the conversation when these topics do come up. The key phrases above are a helpful way to do this.

Don’t be like Lululemon’s founder Chip Wilson, who responded to complaints about the pilling of his brand’s yoga pants by saying “Quite frankly, some women’s bodies just don’t work for it,” a statement that cost the company somewhere between $82 and $128 million.

And if you do accidentally say something incorrect or veer from what you meant to say, admit it and move on: “My apologies, I misspoke. What I intended to say was…”

Write down your sound bites and review them over and over again until they become your go-to answers. This will ironically make your responses seem more authentic, since they’ll be at the tip of your tongue when you’re asked a difficult question. You will sound confident and will be able to more eloquently represent your company.

Practice how to respond if the interviewer asks you several questions, one after the other. For example, you might say “It sounds like you’d like me to address two different issues. Let’s begin with…” Also, practice saying “I don’t know, but I can get that information and get back to you.” Honesty will mean more than pretending you know something that you obviously don’t. Remember Diane Abbott?

Never forget that the words you say will represent your company. Especially in today’s digital age, a slip of the tongue can go viral in an instant. So do your research, prepare your sound bites, and practice them until your responses are second nature. And don’t forget what media coaches often emphasize: Getting your verbal responses right is only the first step of the process. I’ll discuss what else you need to focus on in next month’s post.

This is part 1 in a series that addresses how business owners can use media coaching strategies. This post discusses the steps media coaches would suggest you take to improve your verbal communication skills. Part 2 will address strategies to improve your nonverbal communication skills, and Part 3 will discuss other media coaching techniques that business owners should utilize. See all the articles in the series here.